Is it Genuine Cobalt Net?

Lomonosov Cobalt Net vs Counterfeit Cobalt Net. We have done a comparison test. 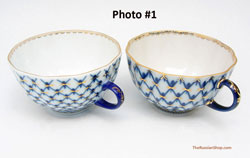 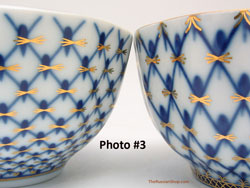 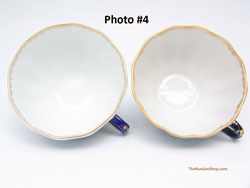 The global trade in counterfeit goods is booming. The International Chamber of Commerce pegs it at nearly 2% of the world's total current economic output, which puts it in the trillions of dollars. When it comes to fake products, the sheer size of the industry is staggering. This page is for consumers who aspire to the real article. We chose cups and saucers as our comparision, however, the goods more commonly counterfeited are dessert and dinner plates (usually on eBay with the description "Lomonosov design" (note the word "design")

We photographed two cups, one fake, the other genuine. Some people would politely say "counterfeit", but "fake" is more pithy and direct. Can you quickly guess which is real? Not sure? The teacup on the right in each photograph is the genuine article.

A side by side comparison reveals the fake has a compressed net pattern, creating an overall busy look to the piece, and not the understated elegance for which Cobalt Net is noted. The decoration on the fake handle is smaller and busier. (Photo #5). On the genuine article, the handle decoration is bolder and the two points, to which the handle is attached, are decorated with gold. On the fake, this elegant touch is eliminated. At the top of the fake cup, the gold on the rim is thin and inside is of a poor quality and does not extend downwards as on the genuine cup (Photos #1, #4 and #5).

Photo #2 show the "fake mark" in red and a correct mark in blue. Although earlier Lomonosov marks were red (Photo #8), the words "Hand Decorated" are not present. In fact, "Hand Decorated" never occurred on the earlier red mark and has been lifted from the blue mark. The fake mark has the correct font, but type size is slightly smaller. A quite noticeable difference as seen in Photo #6 is the fake has a simple gold line at the bottom of the cup, while the genuine has detailed cross hatching. The porcelain quality of the fake is also noticeable, though not photographically. The fake cup weighs 33% more than the genuine cup.
Fake cobalt net proliferates on eBay and many dealers will use the term "Lomonosov design" to get around copyrights. Many of the sellers have Russian names, thus giving their counterfeit offerings fake authenticity. There are some "fantasy" pieces of fake Cobalt net that were not made by the Russian factory, such as a 3-tier serving plate. The shape of the fake Cobalt net teapot (not pictured) is very different from the genuine. Again, as you study the photos, the teacup on the right in each photograph is the genuine article and the cup on the left is the fake. 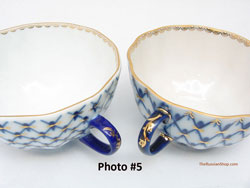 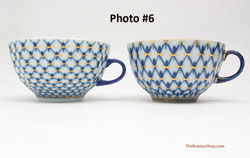 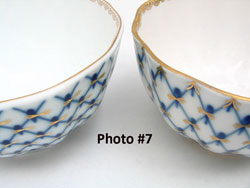 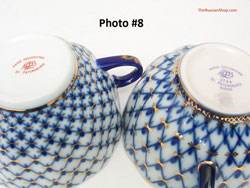 Some random counterfeits found on eBay: 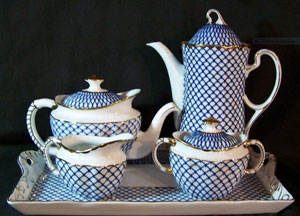 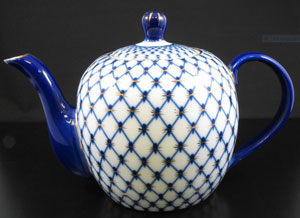 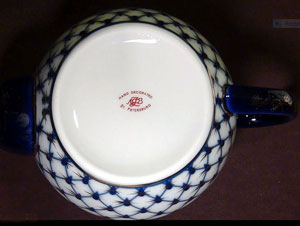 Bottom of teapot shown above with counterfeit backstamp