The Russian Double Headed Eagle, also known as the Coat of Arms of Imperial Russia and the Romanov family crest, was adopted in the 15th century, when Russia became the "Third Rome." The two heads represent the dual sovereignty of the Tsar, both secular and religious. The image of St. George slaying the dragon, an ancient symbol of Russia, was combined with the double headed eagle of the Byzantine Empire to create the arms. 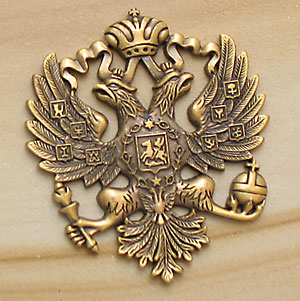