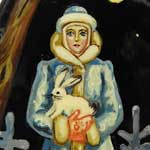 Snowmaiden (sne gu'roch ka) - the granddaughter of Grandfather Frost (Dyed Moroz), who is the equivalent of Father Christmas. Both are very popular Russian characters, depicted in endless ways. 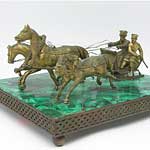 Troika (troy' ka) - a sleigh or carriage pulled by three horses. A symbol of Russia and a common subject in Russian lacquer miniature painting.

Icon - religious paintings, literally "image." The Russians achieved an astonishing mastery of Byzantine and Greek traditions and, by 1150 AD, had a typical Russian style, characterized by two dimensional treatments and ornamental colorings. In later centuries, some icons were covered by an embossed metal "oklad," that might have been highly decorated with jewels.

Riza - (also oklad) – metal repousse (high relief) covering for an icon which permits the face, hands and sometimes feet to show through. The remainder of the representation is worked into the metal cover.

Znachki (znach kee')- commemorative badges and souvenir pins struck by the millions during the Soviet era that are in themselves miniature works of art. A famous character seen on znachki is the 1980 Moscow Olympic mascot, "Misha." 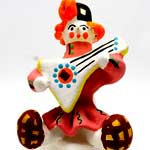 Dymkovo Toys - original and humorous sculptured clay toys from the village of Dymkovo, near Vyatka (formerly Kirov). Depicted in an exaggerated form are merchants and the upper class from 19th century Russian villages and towns. 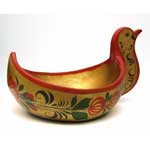 Khokhloma - (hoh-lo-ma') is the name of an old trade village deep in the forests of the Volga region. For centuries, artisans would gather at the fair held in Nizhny Novgorod and sell their “golden” woodenware. The sources of this unique folk art date back 300 hundred years. The secrets of production have been passed down from grandfather to father to sons and daughters.

Kovsch - a traditional bird-shaped drinking vessel, later a fine object d'art for presentation for services to the crown. 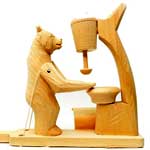 Bogorodsk Wood Carvings - white linden wood action toys and folk art figurines. Sometimes called "bear toys" because the bear is a favorite them for the woodcarvers. Bogorodskoye is an old monastic village. 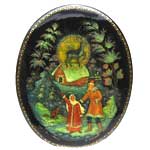 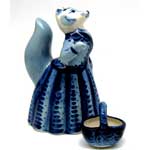 Gzhel - large pottery production center in Russia, about 40 miles south-east from Moscow, based on traditional underglaze painting in cobalt blue. Apparently derived from the Russian word "zhech" i.e. to fire up. Formed by over 30 villages, with Gzhel being the center. In the mid-19th century it accounted for over half of the country's total pottery output. The 1920's saw a revival, especially in the village of Turygino, which became the core of Gzhel production. In 1972, the Gzhel Production Complex was formed to bring together several independent enterprises. 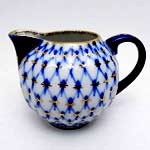 Lomonosov Porcelain - A famous porcelain factory founded in St. Petersburg, in 1744. Once again known as the Imperial Porcelain Factory, it is the oldest porcelain factory in Russia. It produced exquisite porcelains for the Tsar. In the 1800’s it aligned itself with the Russian Academy of Fine Arts, a connection continued to this day. It still operates today making fine tableware, including the wonderful and intricate "Cobalt Net" pattern, as well as figurines. 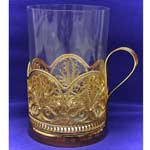 Podstakannik (pod sta kan' nik )- literally a tea glass holder. Came into vogue in the 19th century. They can be made of filigree, enamel, tompac (a metal alloy similar to bronze), sterling silver as well as other metals.

Chara (cha' ra)- a low and round drinking vessel with a side handle. A charka is a smaller-sized chara, sometimes translated as vodka-cup. Also, an old Russian liquid measure.

Bratina (bra' ti na) - loving cup, globe-shaped drinking vessel of the 16th and 17th centuries used as a receptacle for a drink of welcome. Brat (braht) in Russian means “brother.” 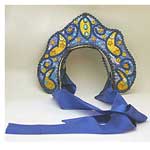 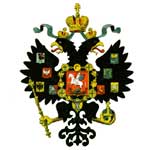 Romanovs - ruling house of Russia from 1613-1917. Among its most famous emperors are Peter the Great, Catherine the Great, and Nicholas II, the last Tsar. 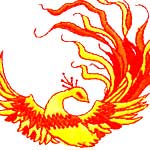 Firebird - also, "Zhar-Ptitsa." Legendary bird that has appeared in many old fairy tales (skaz'ki). Analogous to the Phoenix, the Firebird slumbers during the day only to re-awaken to new life after sunset. 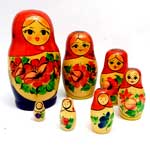 Matryoshka (ma tryosh' ka) - a.k.a. Russian nesting doll. A nested group of hand painted dolls which open to reveal doll after doll after doll. Lathed from linden wood, each can be elaborately decorated. Sets can have as few as 3 dolls or as many as 50. Popular are sets of 5, 7 or more. The making of nesting dolls is Russia's most identifiable folk art. 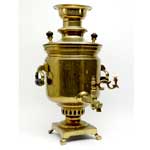 Samovar - a metal urn for heating water in preparation of making tea. Term derived from samo =self and varit'=to boil). A complete set consists of the urn, a tray, a drip bowl, a chimney, and the porcelain teapot for the strong tea brew. It can be made from brass, copper or other metals. The most famous samovars came from the Tula region. 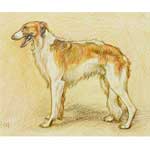 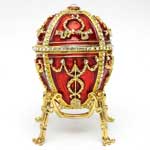 Fabergé Eggs - Peter Carl Fabegé was the most distinguished goldsmith and jeweler in whose workshops were made objet d'art epitomizing the grand Russian style of the early 20th century. He produced exquisite Easter eggs purchased and given by Tsar Nicholas II to the Tsarina and the Dowager Empress. Amongst nobility, miniature egg pendants of all shapes, colors and styles were very popular and exchanged freely.